We have been finishing the second part of our summer vacation. After a week in Michigan we spent three days at our cabin celebrating the 4th of July with friends and family. We then drove up to Winnipeg for our first return trip to the Winnipeg Folk Festival in 9 years! My mother joined us and we've been listening to great music and remembering camping and a lack of showers. 😊 You will find a lot of microblog updates with photos from the Festival.

Fun aside — the last Weekly Thing was done entirely from my iPad and an external keyboard. This one was done all from my iPhone and two tired thumbs. 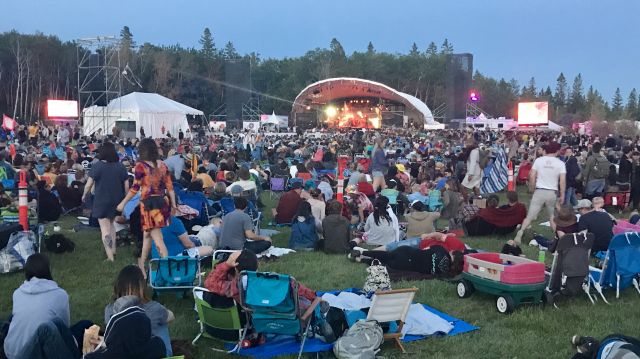 The main stage is where everyone convenes for the evening bands at the Winnipeg Folk Festival. During the day there are several smaller stages, and it feels smaller. Then the mass of people hits you at night!

💬 A personal write up from yet another person disconnecting from Facebook. Worthwhile to read why people decide it's time to opt-out of something so pervasive. I've been Facebook free since 2013.

💬 I’m a huge fan of what Let's Encrypt is doing with certificate management. One of the big challenges was their lack of support for wildcard certificates. Now, given that Let's Encrypt is completely programmable you could make an argument that you can manage any number of individual certificates, but it's complicated to do. This is a nice step to further adoption.

💬 GitHub has had problems with diversity and inclusion. This article is worth reading for two reasons. Interesting to hear how some of the work that Coraline Ada Ehmke did related to this effort. Also this is an interesting read as a people manager. This situation doesn't seem like it was handled very well.

What do we mean by “evidence-based journalism”? – WikiTribune – Medium

💬 I have thought a lot about how to rethink news. One of the core ideas was "Show your work." WikiTribune is adopting that principle and referring to it as evidenced-based.

💬 Every word of this is awesome. I've gotten very crisp in how I manage my calendar. Some of what I do is in here, but also things to learn here.

💬 I recently read Stuff Matters: Exploring the Marvelous Materials That Shape Our Man-Made World and the chapter on concrete was fascinating. The author explores the area of "self healing" concrete that can fix exposure to water. Amazing concept that this article just barely touches on.

The Critical Difference Between Complex and Complicated

💬 Good article on understanding the type of problem you are dealing with so that you approach the solution from the right way.

💬 This is so awesome! An entire text based adventure game driven by data from Wikipedia. Pure work of geek art. Take a moment to admire this is only possible because Wikipedia uses a very liberal Creative Commons license. 👍🏻

💬 Great introduction on how a large tech organization like LinkedIn deals with on-call and incident management. Great to see them embracing the open source movement and sharing their internal solutions.

💬 I can’t honestly decide the right reaction to this. Impressive use of automation and science to drive to desired outcomes? Foolish misunderstanding of how human relationships work? Read and decide for yourself. One thought I had while reading this is if this is what an amateur can do, what are the companies that run dating platforms doing? I feel like the matchmaker of the past was an algorithm and "Big Data". The new one may be AI driven introductions and coordinated "random" encounters. The humans become the pawns in a data-driven AI manipulated show.

💬 Terrible and despicable. What a message to send to young women pursuing a dream with technology.

Day One Premium and the Future

💬 I signed up for Day One Premium and was happy to do it. This article on the challenges developers face when moving to a subscription offering is very much on point. I do think there is a challenge in subscription offerings for a casual users. I have no issue with apps I use daily but the less frequently used apps are hard to justify. It would be nice to support both models, but that introduces a lot of problems. Will be curious to see how this evolves.

💬 Interesting concept. Like the idea and it's a better way to market this than I've seen before. Similar in many ways to "20% time".

💬 Nice writeup on the HEIF and HEVC formats that are coming to iOS 11 and macOS High Sierra. Notable that these are not Apple created formats. Anyone can implement these. I like what Apple is doing here and I think the market value will be in iPhones being able to hold more photos and video than ones not using these more modern standards. Only geeks should have to even think about the formats for most use cases.

💬 I really like Rajiv's thinking on tech organizations. His Three Roles of a CTO is something I refer to often. I like what Rajiv has put together here as well.

💬 Another lawn game involving wood and throwing! I enjoy Kubb and have recently added Mölkky to the mix as well. This looks complicated but may need to give it a try. Does every culture have a wood throwing game? 💡 Via @cunngleah

💬 The events of 2017 in the tech ecosystem depict a sector gone deeply awry. This is not just a case of a few bad actors. This is not something that is fixable with a pledge or a new policy. This is a culture that has been allowed to fester and to rot by enablers who refused to intervene when they witnessed inexcusable behavior or went to great lengths to avoid seeing it. Wow! Accurate and direct. This is the kind of example and leadership we need in tech.

💬 First domino of a hopeful cleansing. It's gotten even worse since this article was written.

💬 This seems so obvious. And to be clear, this isn't partisan as influence was peddled in all ways. Facebook was designed, and generates tremendous revenue, by selling you advertisements. It dresses up as a place for friends and a commons for people to connect and have dialog. That's all a side-show to sell you. You are their product. So, should it be remotely surprising that they can also sell political ideas? We now have 2 billion people on a platform whose purpose is to influence their thinking. Seems dangerous. Happy to not be a Facebook user.

💬 Assume Facebook knows every website you ever go to and has a massive profile of you. Facebook knows more about you than any other organization in the world. If you don't want that you have to use tools to block it. Little Snitch can be used to make sure your computer isn't allowed to make network connections to Facebook. I also use 1Blocker with a custom rule that stops my web browser from talking to any Facebook domains.

💬 Little Snitch upgraded to 4.0. This is one of the utilities that I should use but have never dove in. It allows for complete control at the network layer of what apps are doing. If you are very focused on privacy (which I am!) you should be running Little Snitch.

💬 A very nice and thoughtful write up from Tim Bray on his cat Rune that recently passed away.

💬 👍🏻 Need to keep this link 📎 for those times Tammy gives me an eye roll 👀 for emoji or sticker use.

💬 Great article and I wholly endorse the push to design for failure. The problem isn't failure, it's allowing failure to cascade to something bigger. Well designed systems can and should absorb small and even large failure conditions. I'd love to see technology teams and even Universities adopting this thinking even more.

Women in Tech Speak Frankly on Culture of Harassment - NYTimes.com

💬 The tech industry has a problem with gender diversity. Certainly that problem extends well beyond startups, but I think it is reasonable to believe that the patterns and examples set by VC's impact how startups (particularly in the Valley) behave.

The Epigenetics Revolution: How Modern Biology Is Rewriting Our Understanding of Genetics, Disease, and Inheritance

Nessa Carey takes us on a lively and up-to-date tour of what's known about epigenetic mechanisms and their implications for ageing and cancer.

My Book Club picked this for our next meeting and I’m very interested to learn more about the subject. The beginning has been very engaging.