Welcome to another Weekly Thing! There are a lot of links for announcements from Apple's Worldwide Developer Conference this week. There were many interesting announcements this week.

I decided to create a projects section on my website as a place to capture current and past projects I've worked on. I grabbed the 9 episodes of the Open Loop podcast that Garrick van Buren and I did and put the Open Loop archive online. Check it out and give a listen.

Selectively notify yourself of important tasks in frequently used contexts. 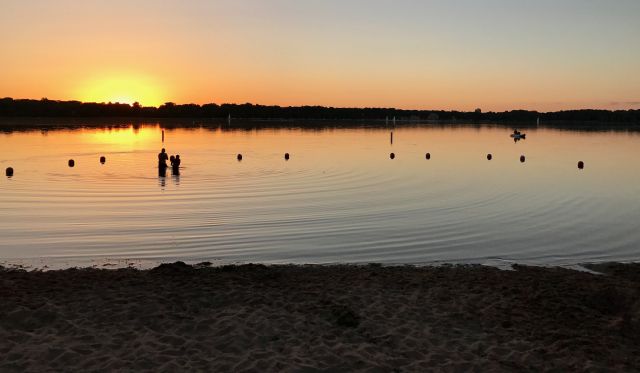 We were biking around Lake Harriet as the sun was setting and looked back to see this gorgeous yellow sunset over the water.

💬 It is great to see more and more applications adopting strong, end-to-end encryption. Especially something like Day One!

Microblogging with GitHub Pages from iOS

💬 Nice to see people exploring more options for putting micro-content directly in there existing sites. Something like this might be where I move to. I can clearly see a way that I could put blog posts, microblog posts, photos, bookmarks and other content forms in my one site.

💬 Seriously, this company is disgusting.

Getting Things Done, Ten Years In

💬 I've practiced GTD for about 10 years now as well and definitely parts of it have become routine. I have also decided to focus on this as a lifelong skill and something I will continue to patiently improve upon.

💬 Thorough writeup on the value of options in early stage companies. This is a topic that few understand as well as they should.

A Brief History of the UUID · Segment Blog

💬 I've used UUID's in systems for years but I never have asked where these came from. I always assumed they got there start with Ethernet MAC addresses but that is just a tiny part of the story.

💬 Fun writeup on Turing Tumble in the Star Tribune.

The Second Coming Of iPad

💬 I’m extremely confident that there will be a time when most people (probably not all) at work will be using tablets, probably iPads. I think Apple is playing a long game here and I am enjoying being part of it.

💬 So much good information here. And completely agree with the thesis that incident command is a thing on it’s own, and not inherently a strongly technical role. The 'time boxing is critical' part is something I see people forget a lot.

💬 Space, to think and be, is more important that productivity. Good GTD and productivity skills should focus on the impact to you, the practitioner, not on your volume of output.

💬 Tyler and I have been playing Monument Valley 2. Actually he's already completed it. It’s a great followup to the first one.

Monica - a CRM for your friends and family

💬 Oh my, this is the kind of horrible thing that happens when introverted techies try to solve social savvy.

💬 This looks interesting, but will have to be experienced. watchOS is definitely a fabulous place to put intelligence.

💬 Yes, of course Facebook is broken. And it’s breaking you too. I've not regretted deleting my account 4 years ago. Opt out.

💬 I use AirPlay a lot. That is the primary way I listen to music at home. All of my "zones" are AirPlay capable. Only being able to send to multiple AirPlay locations from a Mac is a definite limit for me. Sending to multiple from iOS will be nice, but it’s also not clear to me that old AirPort Express units will be able to deal with AirPlay 2. Hmm… let's hope there is a firmware upgrade to get them AirPlay 2.

💬 Great roundup of all the great new things in iOS 11.

💬 Very good annual read on trends in the DevOps world.

💬 Turns out your printer is making it possible to track you as well? Where is the ethics in tech!

💬 Yahoo! Pipes was super helpful for certain tasks. This could be similarly useful. In it’s current incarnation it’s pretty limited in features, but will be interesting to keep an eye on.

💬 Some? A lot of great things in iOS 11 for people that are using their iPad's in a work environment.

💬 I wish HomePod was cheaper, but I’m glad that Apple entered this space. I'd be interested in a more direct competitor to the Amazon Echo. I do suspect I'll be getting one, or two, or three anyway.

💬 A lot here for people that do more intensive work on their iPad.

The story of RSS-in-JSON —Scripting News

💬 Dave Winer doing some stuff with RSS-in-JSON. Have to say I’m disappointed that he isn't using JSON Feed. Seems stubborn, perhaps prideful and bad for the ecosystem.

💬 I’m a huge fan of Gawande's Checklist Manifesto. It highlights many ways to use checklists to improve processes and outcomes. Good read on using checklists in tech.

💬 I got to see these tables in action at the Maker Faire and I was blown away. They use sand like a Zen Garden toy under glass and then control a marble magnetically with an Arduino device. It uses the marble to slowly create these amazing patterns in the sand. Mesmerizing! Felt similar to when you gaze into a fire. Amazingly successful Kickstarter too raising $2 million!

💬 I love OMNI magazine as a kid. In fact, I still have about a dozen copies that I've archived that I thought were the coolest things ever when I was a kid. Cool that you can now get these.

In the Kingdom of the Blind —Bridget Kromhout

💬 Lucky to know Bridget and I really like her writing on diversity. Read all of this and take time to think it through.

💬 Cloud technology is making technology teams thing about costs in a different way. It’s not always an easy path, but it’s good and it’s interesting to read as organizations work through this new dimension.

Wikitribune is a news platform that brings journalists and a community of volunteers together. Wikitribune just got funded and I became a backer. I’ve been impressed with Wikipedia and am excited about Jimmy Wales and team focusing on the news ecosystem. I'll be very curious to see how they realize these objectives. I've previously thought about how news can be reinvented. I focused more on the open source model instead of wiki, but either way I feel like a fundamental rethink is possible! Let's see how they tackle this. Become a supporter today!

Thank your or subscribing. If you know of people that would like the Weekly Thing please forward it to them and spread the word!