The kids went back to school this week! Everyone had a great start to the school year. Now we have the holiday weekend and the unofficial end-of-summer here in Minnesota. We are heading to my brother's cabin on Pokegama Lake for the weekend and I'm looking forward to time on the lake and a nice evening by the fire. I hope you all are enjoying the long weekend!

I started a little project over the last couple weeks. I decided that the R/W Book Club needed a website again. After getting the hang with Jekyll for my main site I knew I could do what I wanted for the book club. It is still pretty rough, but if you are curious what books we are reading check out http://rwbook.club/! 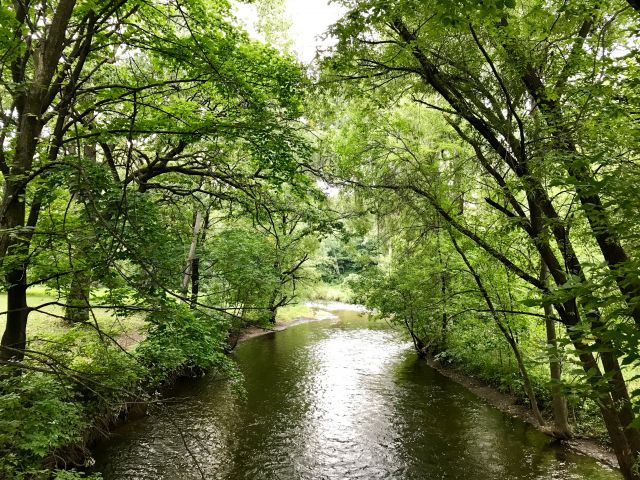 One of the favorite things about where we live is having Minnehaha Creek just across the block. I feel like I can walk a few hundred steps and I get to take in running water, green spaces and relax. Running water is so great.

💬 Interesting (worrisome?) read from a publisher on how they think of their relationship to Google.

💬 Microsoft writes up some amazing pattern and architecture stuff. This event sourcing pattern was mentioned in a discussion I was in recently. Good overview! Instead of storing just the current state of the data in a domain, use an append-only store to record the full series of actions taken on that data. The store acts as the system of record and can be used to materialize the domain objects.

Twitter Bots Use Likes, RTs for Intimidation —Krebs on Security

💬 Just another article that makes me really question why I bother with Twitter. Some layer of Twitter is a constant war of botnet's pretending to be people and influence people. Yuck.

Stepping Up to the Plate: A Story About Being On-Call - PagerDuty

💬 Fun read especially for those that aren't aware of the incident response that happens in operations teams. I also like the reference to "the ball" in here. Operations teams always have a concept of someone having "the ball" (the problem). You have to manage who has the ball (sometimes balls!) in a very clear way.

Testing in production: Yes, you can (and should) | Opensource.com

💬 ☺️ A ton of truth in this. I'd put everything in this in the bucket of being pragmatic.

💬 I've seen this play out. Early analysis of a problem starts a solution and you get too far in the solution before you realize your assumptions are wrong. While refactoring is cheaper these days, it’s still a good idea to stay on a whiteboard to make sure you understand the problem before writing out the solution.

💬 Interesting suggestions of new gestures for the upcoming iPhone. These are pretty big changes. It will be interesting to see if this pans out.

When something goes wrong in an organization, the first question that is often posed is, “Whose fault is it?” When there’s data missing in accounting, it’s the bookkeeper’s fault. If we lose a key customer, it’s the sales group’s problem- “They promised more than we could deliver!”

Hash of the Titan: How Google bakes security all the way into silicon • The Register

💬 You may remember that the Snowden docs showed that the NSA modifies silicon in some machines as it leaves the country. Looks like Google is actually defending against an attack at even that level.

💬 Constant fractional attention is a real problem. I think back to research I read years ago suggesting that attempting to multitask alters your thought patterns to force you to. But then I forgot what I was thinking about. 🙃

💬 Nice, direct advice for building out your culture. I’m not saying I agree with all of it, but it’s always enlightening to read these. Hat tip 🎩 to @jkelly3 for this.

💬 I installed and signed up for Sarahah and I did git it access to my contacts. Curious how they are using it, since they don't seem to be. I assumed it would be used for finding contacts or to streamline the process of sending someone feedback. Neither are features in the app today.

siftrss | Filter your RSS feeds and throw away the junk

💬 Super simple tool that allows you to filter an RSS feed. I love stuff like this. It lets me think of the web like a Unix shell with inputs and outputs. Also, this is the kind of thing we get when we have open standards.

I would like to propose that blockchains are a network concurrency primitive, like the two-phase commit or distributed hash-tables. That modern Turing-Complete chains, like Ethereum, are simply Erlang or Smalltalk-style virtual machines, and that their blockchain nature is orthogonal to their VM nature. This makes blockchain's future simply a part (although a vital one) of the widening adoption of decentralized computing.

💬 Doc Searls thinking about the long term aspects of all the personal data collection on the web. I wish that I was as confident as he that even the biggest players on the web will pass over time. Plus got to learn a new word epiphenomenal.

Minnestar is the technology community for Minnesota. If you are passionate about technology you need to go to Minnebar and Minnedemo. Did you know that Minnebar is the largest BarCamp in North America and one of the largest in the world? Its also been going on for over 10 years? Minnedemo is the best place to hear about innovative tech and fun projects in the Twin Cities area. I am on the Minnestar board and I focus on Minnestar as one of the driving forces improving and expanding the technology community in the area. Minnestar is a 501c3 non-profit. Become a Community Supporter today!

Capture life as you live it. From once-in-a-lifetime events to everyday moments, Day One’s elegant interface makes journaling about your life a simple pleasure.

I've referenced a number of different articles about using Day One but I've never highlighted the application itself. I subscribe to Day One and I use it as my journal. I have multiple journals: Journal, Top 3, Reviews, Musings, Cooking, Fitness. Each one is used for different things. Day One has a great user interface and I like how it captures relevant metadata for each post. If you are thinking about journaling I wouldn't recommend anything else.