This was a big week for people that have a lot of iOS devices with the launch of iOS 11 along with watchOS 4 and tvOS 11. You'll see a flood of Apple related links this week. More than any normal person would ever want to read, but where is the fun in being normal? 🤣 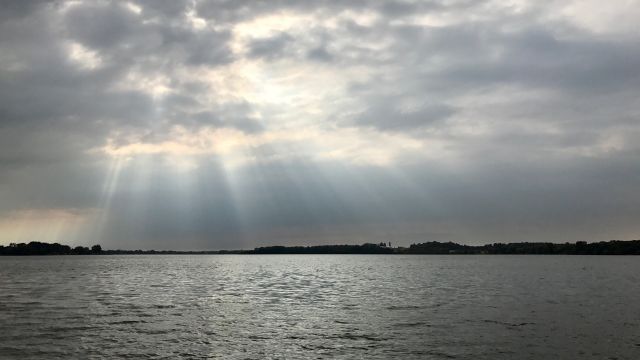 We were taking in some of the final days out on the water before we officially say goodbye to summer and put the boat in for the winter and caught these gorgeous rays of light streaking through the clouds.

💬 Facebook moved really fast on this quickly growing license concern around React. Moving to MIT License should quell the concerns around those looking at adopting React.

💬 Having a GPS in so many devices has been a revolution bigger than I would have expected. Moving the accuracy of GPS locations from 5 meters to 30 centimeters would enable a whole new class of use cases. It’s surprising to me that this is even possible! 🕴🏻

💬 Austin Mann writes about cameras as a working photographer does, not megapixels, but the photographs it takes. 📷 The portrait lighting mode looks amazing in the new iPhone 8. Adding Slow Sync flash is another big advance.

iPhone 8 Is World's Fastest Phone (It's Not Even Close)

💬 Apple purposefully doesn't tout CPU benchmarks on their machines and will usually just reference a multiple on other devices. The benchmarks in this article show how far ahead the A11 Bionic chip is in raw compute. An iPhone 8 benchmarks faster than a recent MacBook Pro!

The inside story of the iPhone X 'brain,' the A11 Bionic chip

💬 What Apple is doing with the silicon behind the iPhone is amazing. They are miles ahead of anyone else in mobile. You could be forgiven if, after Apple’s giant, two-hour product launch event on Tuesday, the only thing you remembered is the stunning iPhone X. It is special. It’s also nothing without the A11 Bionic CPU. As an aside, it’s surprising to see how many companies Apple has purchased in the hardware and fabrication space.

Anatomy of a Moral Panic

💬 So much truth in this article. I spent years in media and the incentives and revenue systems that have evolved there are not good for the mission of news organizations. And reporters have no choice but to chase clicks. Because Google and Facebook have a duopoly on online advertising, the only measure of success in publishing is whether a story goes viral on social media. Authors are evaluated by how individual stories perform online, and face constant pressure to make them more arresting. Highly technical pieces are farmed out to junior freelancers working under strict time limits. Corrections, if they happen at all, are inserted quietly through ‘ninja edits’ after the fact. That pretty much sums up the status quo.

💬 SPS Commerce partnered with the Elimisha Children's Project and helped fund the reconstruction of this new school in Kitui! 👏

💬 Tim Bray catching on a number of articles that I've also seen. When I read articles like this I can’t help but going back to the root of things and reminding everyone that there are no ethics classes taught to technologists. Our industry is one that rarely even puts that topic on the table. We are creating a world of software and hardware that many people live inside of without really understanding what we are doing, and the tradeoffs implicit in it.

Apple does right by users and advertisers are displeased —EFF Updates

💬 Happy to see the EFF express their opinion on this. Also gives me even more confidence that this approach has been vetted by more people. Intelligent Tracking Prevention looks great! 👏

💬 Ars always does super detailed reviews of new releases of iOS. This is almost book length. 📖

💬 In this weeks flurry of new software for the Apple ecosystem tvOS also got a major version upgrade. As someone who has 3 Apple TV devices using tvOS I can attest that Home Screen Syncing is a bigger deal than your would think. Everything else is pretty minimal updates.

💬 Alright, so I've said many times that QR codes are dumb and have no utility. I may have to take some of that back. Putting a QR code in the house that a visitor can hit with their camera and jump on the WiFi network is a pretty slick use case. I'll put one up and see if anyone is able to use it. I still love Pictures of People Scanning QR-codes! 🤣

With the addition of cellular networking in Series 3, Apple Watch gains something essential: independence. It’s not just a cool feature. It’s aimed smack dab in the middle of the two things people like best about Apple Watch: notifications and fitness.

Facebook’s war on free will | Technology | The Guardian

💬 The long read: How technology is making our minds redundant

💬 John Krygier, a cartographer and professor, takes Tufte's visual display guidelines. The 20 Tufteisms and the Six Commandments are superficially less than I expected, from the perspective of practical guidelines. But, upon reflection, they do touch on many of the fundamental issues that determine if a map design is going to work or not, and what could more practical than that? Not a takedown per se, but a detailed breakdown of how you would practically apply these techniques.

Microsoft’s CEO has stopped infighting, restored morale, and created more than $250 billion in market value. All it took was focusing on what matters most.

💬 This is a delightfully fun read analyzing the robots.txt files of the top million websites. Interesting history about the origins of the robots specification and the fact that it was never standardized. There isn't even an RFC for it! As a bonus the code excerpts to show the analysis are all in Python and was the first time I've seen the collections module.

💬 I still haven't coded anything in Swift but I continue to watch the language evolve from the sidelines. I find it interesting to see how the Swift community is forging this language.

💬 Nice, quick primer to using the new drag & drop feature in iOS 11 inside of OmniFocus. Many of the use cases that are highlighted for drag & drop are between applications but this shows how powerful these features are inside one application.

These are solid year-over-year updates — at least as impressive as the iPhone 7 was over the iPhone 6S. If they hadn’t debuted alongside the iPhone X we’d be arguing about whether these are the most impressive new iPhone models since the iPhone 6.

💬 Good list of features in iOS 11. Take a read and see some of the things that you may not know about.

💬 I switched to the Siri face immediately after updating to watchOS 4. ⌚️ I’m curious to see how it does anticipating what information I will need throughout the day.

💬 Multi speaker support in AirPlay 2 is a big deal. I have 5 AirPort destinations and only iTunes on my Mac can send to multiple. 🎶

💬 The monster iOS 11 review from MacStories! 🎉

💬 Programming robot control arms to play music! 🎶 It’s a good song too. 🎧 Nigel Stanford spent a month programming these robots to play this. 🎩 Hat tip to my friend Dennys for this link.

💬 This article from a male co-founder reflecting on how his female co-founder was dismissed and not recognized by people they met with is illuminating. This stuff happens all the time in tech and I found this an illuminating article.

💬 I linked to this W3C DRM decision and now we see the EFF reaction to endorse "Encrypted Media Extensions", to make DRM possible, on the web. You have to search long and hard to find an independent technologist who believes that DRM is possible, let alone a good idea. Yet, somewhere along the way, the business values of those outside the web got important enough, and the values of technologists who built it got disposable enough, that even the wise elders who make our standards voted for something they know to be a fool's errand. I’m not sure what I think about leaving the W3C to protest this but I do believe the EFF is on the right side of this position. Check out Gruber's comments on the same article.

💬 Impressive platform for hosting static web projects. Some interesting hooks for things like Identity and Form handling as well which can be very tricky in a static site.

💬 I looked into Hugo a while back and was very impressed, but Github Pages native support for Jekyll keeps things really simple. This post highlights an interesting path to make a transition and introduced me to the very impressive Netlify service. I will very likely be moving Link Thing to Hugo for performance reasons alone.